The CLA Mercedes-Benz will turn heads. Its big brother the CLS has been doing just that for two years and the CLA looks like a CLS in miniature.  The CLA though is not a bespoke, luxury cruiser that is happy to be next to almost any Porsche
or Audi like its big brother, but is in fact based on the A Class platform 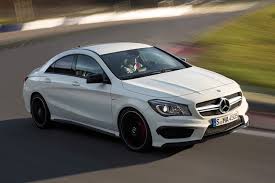 Any regular Mercedes Driver will be surprised by the drive of the CLA. It is front wheel drive and feels more like an Audi A4 than a C Class. But, don’t let that put you off, it drives really well with
a great range of diesel engines mated to superb Mercedes gearboxes. In fact, in CLA45 AMG guise, this little beauty has 355 bhp and hits 60 in 4.5 seconds and is a real flying machine.
But the CLA45 is never going to be the best selling model. The two litre diesel goes well and drinks gently and will be the popular choice
Youtube Video
The Target audience
The CLA is going to sell to someone who was looking at an A4 or BMW 320d and covers many miles in a company car but wants something different, throw in Mercedes quality and the CLA hits the spot.
Additionally, over the last few years we have had some snow and anyone driving a rear wheel drive car without snow tyres will have been parked up for some time. The CLA will not suffer the same fate as its C Class brother and most 3 series BMW
It will also sell as a private car, small enough to park and big enough to carry five people 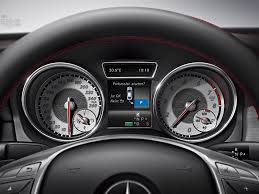 What is it like in the flesh?
On test drive  yesterday, the white CLA got nothing but admiring looks and rightly so. Mercedes have got this car just right. It is not a big car, but it doesn’t pretend to be, but it is a good looking and well put together car.
The six speed manual gearbox version that  I drove yesterday is as sweet as any manual gearbox that I have driven this year. The seven speed auto would though be my choice. Not as impressive as the BMW 8
speed ZF offering but a good gearbox by most standards
The CLA is smaller inside than a C Class, but you only need to look at it for that to be obvious. Unless you are a 6’4″ plus , you won’t have a problem with leg and headroom. Once inside, its obvious that you are in a Mercedes. The dials and dashboard along with all the switch gear is straight out of the C Class, high quality and good to use

A perfect private lease car
Mercedes have been investing millions in marketing and guaranteeing future values of their cars to increase their market share of the UK fleet market. The CLA is a fabulous addition
to their range and will  take business from the Insignia and Mondeo as well as BMW and Audi. But in order to get a serious share of the market, Mercedes UK are going to need to review the supply price of the CLA and include some of the expensive add-ons such as the Drive Kit Plus as standard fit. This will bring it directly into competition with the 1 Series BMW rather than the 3 Series and wouldincrease its market share
In conclusion
Without doubt, this car will sell to people who have not previously owned a Mercedes Benz as well as die hard Merc owners.
I don’t think they will be disappointed

What is the best electric car to lease in 2019? When is that new Model 3 Tesla ready to price and order? Looking back over … END_OF_DOCUMENT_TOKEN_TO_BE_REPLACED

Audi A3 Car Leasing Deals Happy new car day to this Camden-based personal leasing customer. And a big thank you to … END_OF_DOCUMENT_TOKEN_TO_BE_REPLACED

The Ultimate Electric Supercars are available now Nothing has given the world of EVs more credence, or excitement, than … END_OF_DOCUMENT_TOKEN_TO_BE_REPLACED

Thank you to our business car leasing customer, from Hereford, for sending pictures of their latest fleet addition - the … END_OF_DOCUMENT_TOKEN_TO_BE_REPLACED

If you are able to turn your attention away from the COVID/Coronavirus situation for just a moment, you may remember that … END_OF_DOCUMENT_TOKEN_TO_BE_REPLACED

Do I have to pay a big deposit when I lease a new car? Firstly, thank you for the pictures of this brand-new BMW 3 … END_OF_DOCUMENT_TOKEN_TO_BE_REPLACED

Thank you to our business car leasing customer, from … END_OF_DOCUMENT_TOKEN_TO_BE_REPLACED

Audi PHEV Car Leasing Thank you to our business … END_OF_DOCUMENT_TOKEN_TO_BE_REPLACED