At Vanlease UK we have been supplying new school minibuses since 1998 and until recently almost all have been 14 seats and Ford Transit based.

There is though a change toward  smaller, 9 seats, minibuses that are based on a lighter van with better fuel consumption and less driver licence restrictions. They are ideal for small school choosing a new minibus.

As a result more manufacturers than ever have a product on offer that would make a great new school minibus.

This year saw the launch of the new Ford Transit Custom and with it the Tourneo 9 seater. Rows 2 & 3 of the seats can be rolled forward and then slid forward to achieve a three seater van or a six seat site van with the

carrying capacity of small van. Based on the new Van of the year, the Tourneo is just like driving a car, it achieved 5 star Euro NCAP in crash tests and has an overall economy figure of 43.5 mpg.

The Traffic 9 seater minibus weighs in at just 1900kg and as such falls into the category of light minibus that can be driven without concern on a normal driving licence. For more info on licence requirements click <here>.   The Traffic has an enviable track record for quality and reliability and is the best-selling van in Europe. Its combined overall fuel consumption is 42.2 mpg. 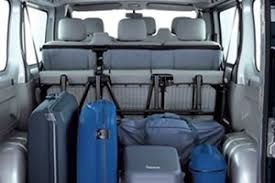 The Vivaro is the twin to the Traffic. Built in the UK, the

Vivaro is the van of choice for the AA and over 900,000 Vivaro’s have so far been supplied across Europe. It shares layout with the Traffic and is a good choice as a 9 seater school minibus.  Vauxhall are well represented in the UK and all dealers are set up to service their commercial products.

The 9 seater Transporter, the Shuttle, has a flexible seating arrangement and unusually it has sliding doors on each side. The Transporter is also available with VW’s own four-wheel drive system, four-motion.  The system copes with really awful winters in German, its

ideal if you work all year round with airport runs in Winter as well as Summer. VW have worked hard at their Bluemotion technology on their vans as well as cars and the latest Transporter is up with the best when it comes to economy and whole of life cost.

What is the best electric car to lease in 2019? When is that new Model 3 Tesla ready to price and order? Looking back over … END_OF_DOCUMENT_TOKEN_TO_BE_REPLACED

Audi A3 Car Leasing Deals Happy new car day to this Camden-based personal leasing customer. And a big thank you to … END_OF_DOCUMENT_TOKEN_TO_BE_REPLACED

The Ultimate Electric Supercars are available now Nothing has given the world of EVs more credence, or excitement, than … END_OF_DOCUMENT_TOKEN_TO_BE_REPLACED

Thank you to our business car leasing customer, from Hereford, for sending pictures of their latest fleet addition - the … END_OF_DOCUMENT_TOKEN_TO_BE_REPLACED

If you are able to turn your attention away from the COVID/Coronavirus situation for just a moment, you may remember that … END_OF_DOCUMENT_TOKEN_TO_BE_REPLACED

Do I have to pay a big deposit when I lease a new car? Firstly, thank you for the pictures of this brand-new BMW 3 … END_OF_DOCUMENT_TOKEN_TO_BE_REPLACED

Thank you to our business car leasing customer, from … END_OF_DOCUMENT_TOKEN_TO_BE_REPLACED

Audi PHEV Car Leasing Thank you to our business … END_OF_DOCUMENT_TOKEN_TO_BE_REPLACED