You could easily be forgiven for thinking that diesel cars are no longer being produced. Indeed, the team at Carlease UK are now being asked by customers as to what options are available in petrol, petrol/electric or purely electric format on the basis that a diesel vehicle can no longer be supplied. The issue is that recent political hysteria is effectively demonising diesels and providing an impression, albeit misleading, that these cars are no longer in production or that it is somehow immoral, unethical or unthinkable to purchase or lease a new one. The truth is that diesel vehicles are still being produced in healthy numbers and the industry is still awaiting formal guidance from the Government, car manufacturers and other associated bodies to steer our industry in the right direction.

Much of the recent controversy surrounding diesels pertains to three contributing factors:

3) scandals from VW (and others) have hit the press in relation to the stated CO²/MPG performance of the vehicle.

Back in 2001, the UK Government made changes to reduce tax for cars with lower CO² levels. This helped fuel a desire for diesel vehicles in a growing company car market and create a nation obsessed with CO² and MPG.

That being said, there was little recognition of the NO being emitted by the diesel vehicles until recent reports.

To combat the more polluting diesel vehicle, manufacturers have already been trying to alleviate the problems, in particular by fitting DPFs to vehicles and also by introducing the AdBlue additive.

The DPF is, in itself, a separate issue entirely. This is a device which is designed to remove diesel matter (or soot) from the exhaust gases of a diesel engine. It operates through a passive regeneration process, which relies on the exhaust temperatures becoming hot enough to burn off the matter/soot. However, unless you are a driver who is driving longer distances, in particular motorway-style driving, you increase the risk of DPF blockages.

In the case of urban-style start/stop driving, exhaust temperatures are not becoming hot enough.

This does not allow the passive regeneration to work and the matter/soot will block the DPF and subsequently lead to engine issues. In most cases, it is the driver’s responsibility to organise the clearing of a DPF. Moving forwards, unless the driver-behaviour changes, i.e. introducing longer-distance travelling and motorway journeys, the issue will not be cured. Very few drivers are considering this aspect of diesels, mainly due to them concentrating on the MPG of a vehicle. Many of those involved in the automotive industry, us included, are sending information on DPF’s so that drivers are fully-aware of the technical aspects of a car before moving forwards.

AdBlue is another recent misnomer in the car industry which has led to further confusion. Effectively, this is an additive which was introduced to reduce the NO emissions from diesel cars using a technology process called selective catalytic reduction (SCR). AdBlue, which is a combination of pig urea and water, is injected into exhaust gases to break down harmful NO agents. Most modern diesel vehicles will have AdBlue technology and you may have noticed a small blue cap next to your fuel cap or, in some cases, an AdBlue cap in your boot. Modern vehicles should alert you to the fact that the AdBlue is low and then, at your own cost, you need to organise this to be replenished. At circa £1.50 per litre, this should not be an expensive exercise. However, do ensure you replenish it, as this could lead to the car not starting or going into “limp” mode if not properly monitored. In exactly the same way as the DPF, the automotive industry is providing guidance to customers to ensure they understand their obligations on AdBlue before purchasing/leasing a new car. 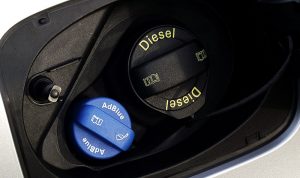 What has perhaps complicated all of the above, has been the different scandals to hit the press over the last 12/18 months. In particular, the VW group has been pushed into the limelight for allegations relating to CO², MPG and other emission statistics which do not reflect what is a true reality. Much of this is still on-going in the USA. This has subsequently created more confusion in the industry and has inevitably led to a knock in consumer confidence and understanding.

As we write this article, it is fair to say that diesel cars are still very much alive. Until we have some further guidance from the Government, drivers do need to be more educated when looking for a new car. Whether you are purchasing or leasing a vehicle, consider to what extent this is suitable for your needs and requirements based on your driving style and behaviour. If you are covering shorter stop/start journeys, a diesel is not a pragmatic option as this could lead to issues with the DPF. Additionally, for company car drivers, the increasing costs of Benefit in Kind (company car tax) is creating a situation where they need to consider electric or plug-in hybrid electric vehicles (PHEV) to ensure they are in a genuinely CO² friendly car.

What is the best electric car to lease in 2019? When is that new Model 3 Tesla ready to price and order? Looking back over … END_OF_DOCUMENT_TOKEN_TO_BE_REPLACED

Audi A3 Car Leasing Deals Happy new car day to this Camden-based personal leasing customer. And a big thank you to … END_OF_DOCUMENT_TOKEN_TO_BE_REPLACED

The Ultimate Electric Supercars are available now Nothing has given the world of EVs more credence, or excitement, than … END_OF_DOCUMENT_TOKEN_TO_BE_REPLACED

Thank you to our business car leasing customer, from Hereford, for sending pictures of their latest fleet addition - the … END_OF_DOCUMENT_TOKEN_TO_BE_REPLACED

If you are able to turn your attention away from the COVID/Coronavirus situation for just a moment, you may remember that … END_OF_DOCUMENT_TOKEN_TO_BE_REPLACED

Do I have to pay a big deposit when I lease a new car? Firstly, thank you for the pictures of this brand-new BMW 3 … END_OF_DOCUMENT_TOKEN_TO_BE_REPLACED

Thank you to our business car leasing customer, from … END_OF_DOCUMENT_TOKEN_TO_BE_REPLACED

Audi PHEV Car Leasing Thank you to our business … END_OF_DOCUMENT_TOKEN_TO_BE_REPLACED