Ford are not resting on their laurels, with an already top class range of commercial vehicles with Ford van leasing deals among the most competitive.  This year they are launching a new small van, the Transit Courier, a new medium van in the shape of the Transit Connect and they have already launched the Custom. At the end of the year they launch the  new Transit.

Starting at the Courier, Ford have targeted those needing a van in the city or large town. They have built it around the award winning ecoboost 1.0 petrol and 1.5L Duratorq engines, established technology for refinement, reliability and efficiency. Even though just a baby, the Courier will hold over 2.3 cubic meters of load, it has a range of business friendly gadgets including the SYNC system for hands free phone calls in and out, including TEXT to speech technology.

In size order, the next up is the New Connect. All that has carried over is the name; the New Connect is a car like in its drive and has a superb load space with excellent fuel economy. Ford have included technology on this van that has been the developed on the Ford Focus, like Auto-Stop-Start and a closing grille when the engine does not need to cool.  Thoughtfully, Ford have designed the Connect to carry three in the front and consistent with the aim to make their vans useable, the front seats will fold flat with a local USB power supply and storage.  Ford will also launch a double cab version of the van. Across the Connect range, Ford have included an auto braking system for city driving, where the system detects something stopped and considers that you are not stopping. 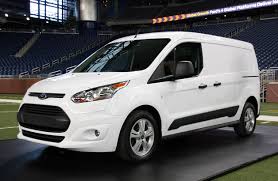 The Transit Custom won International Van of the year within months of being launched. We have customers running them and the reports are nothing short of fantastic.  Consistent with Ford’s safety policies, the Custom achieved an NCAP 5 star rating, a first for a van. It has lane alert, SYNC and also has the auto braking. The Custom has auto-start stop and even smart regenerative charging. Ford are right up on top when it comes to economical vans.  Available in van, double cab or combi layout, the Custom is already taking the share of the market that Ford hoped.

Lastly the new Transit. Due in the autumn, the new Transit will benefit from every technology that ford have researched in the last few years. It will be the safest and most economical in class. It aims to provide a virtual office set up with power and folding seats that can be used for your laptop. As the government makes moves to begin CO2 emission demands on light commercial vehicles, Ford are at the front of the cue, with stop start and efficient engines with superb aerodynamics. The Auto-Start Stop can save as much as 10% and Ford are alone is offering this on vans.

Available in a huge range of body styles, including the van 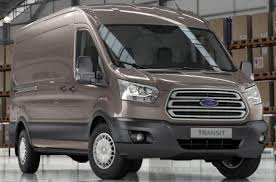 in short, medium and long wheel base as well as double cabs and high roof options.  It will be available in rear and front wheel drive as well. With a huge choice of transmissions, engines and spec.  It will be a winner for Ford.  At Vanlease UK, our Transit custom van  on contract hire has already been a great success and we the additional models will be on our website over the next few months.

What is the best electric car to lease in 2019? When is that new Model 3 Tesla ready to price and order? Looking back over … END_OF_DOCUMENT_TOKEN_TO_BE_REPLACED

Audi A3 Car Leasing Deals Happy new car day to this Camden-based personal leasing customer. And a big thank you to … END_OF_DOCUMENT_TOKEN_TO_BE_REPLACED

The Ultimate Electric Supercars are available now Nothing has given the world of EVs more credence, or excitement, than … END_OF_DOCUMENT_TOKEN_TO_BE_REPLACED

Thank you to our business car leasing customer, from Hereford, for sending pictures of their latest fleet addition - the … END_OF_DOCUMENT_TOKEN_TO_BE_REPLACED

If you are able to turn your attention away from the COVID/Coronavirus situation for just a moment, you may remember that … END_OF_DOCUMENT_TOKEN_TO_BE_REPLACED

Do I have to pay a big deposit when I lease a new car? Firstly, thank you for the pictures of this brand-new BMW 3 … END_OF_DOCUMENT_TOKEN_TO_BE_REPLACED

Thank you to our business car leasing customer, from … END_OF_DOCUMENT_TOKEN_TO_BE_REPLACED

Audi PHEV Car Leasing Thank you to our business … END_OF_DOCUMENT_TOKEN_TO_BE_REPLACED